What is love? Baby don’t hurt me…

Anyway, Sam and I celebrate 7 years of marriage this month. That’s a long frickin time. And we waited 6 years to grace the world with our spawn which made our families basically resign to the fact that grandchildren weren’t coming from us. My little brother assured them once he hit high school he’d “do his best” though. Of course he was joking. I hope. :/

We’ve been through a lot in 7 years. No one said marriage would be easy but we were so young we went into it without any idea of what we were doing. In a way, we kinda grew up together. And a lot of the times, people end up growing apart in their 20’s. He went to the Marines, I went to college – we were in different worlds for the first few years of both our engagement and marriage. I don’t think it would have surprised many people if we hadn’t stayed together. Both of us have volitale tempers, and both of us run on emotions a lot of the time. But in that last case, I think that’s what made us work.

One of my most vivid memories of our marriage so far was when he left for Iraq – about 6 years ago. My mom came out to help me move back home, and we took him to the base to say goodbye. I had cried the entire night before and had a massive headache, swollen eyes, and a stomachache that morning. A great way to have him see me last. We stood on the beach with everyone else. I had no idea when he would be home. Or if. And that part killed me. I kept thinking, “I’m going to be sick if this goes on much longer.” The waiting for goodbye. He must have felt the same way because he finally just hugged me and whispered, “I have to go, thing.” His nickname for me.

He let go and turned around and I just stood there sobbing. I literally felt like my heart was being ripped in two and that I might vomit. All I could think of as I watched him and he kept turning around, waving and crying, was “What if I never see him again?” My mom helped me in the car and we made the long drive home – 2 days on the road. I cried most of the way. I didn’t know when I would hear from him next.

9 long months later, and many, many nights of worrying and crying, he came home. That was one of the best days of my life. I think back often on those feelings when I am so mad at him I could scream. Watching him leave. Feeling that surge of pride, desperation, sadness, and total loss. I know what an incredible husband I have that he would willingly go to Iraq. Because he didn’t have to – it was a request for someone in his platoon that he volunteered to take.

We have our problems and our differences. Our marriage isn’t perfect. There are times I would like to leave and live alone. Without any dirty socks on the floor and a neat kitchen. I know there are times he would like the same – with dirty socks and a dirty kitchen but not a nagging wife who cleans up behind him. But we are in this together. Commited. When you marry someone, you accept them for who they are. Faults and all.

Sometimes I think that our society has a high divorce rate because we have been taught early on that we deserve perfection. And if our partner is any less, by golly we leave. Don’t put up with their crap, make a list of the things you want and stick to it. And if you’re 73, married 5 times and still alone and looking, well then, you just have very high standards.

Marriage is about realizing you married a human being. An imperfect person. And they married you – with your imperfections. It’s taken me forever to accept that, and I still work on it. So while some things should never be tolerated in a relationship, other things need to be worked on together. Marriage is an long process. I don’t know of one couple who finally just got it right and lived happily ever after.

My husband may not wake up and leave me love notes or bring me home diamond earrings – but he gets up and works every day to pay for our home and needs, he brings me home flowers when he makes me mad, he lets me buy crazy amounts of cloth diapers without saying a word, he cuddles with me on the couch, he gives our daughter a bath so I can have a break, and he always drives on long trips because he knows how much I hate to.

So I remember a vow I took 7 years ago –

“…in sickness and in health, for richer, for poorer, for better, for worse, in sadness and in joy, to cherish and continually bestow upon them your heart’s deepest devotion, forsaking all others…”

and I feel blessed to be with him still, and for him to have stuck around and love my crazy self. 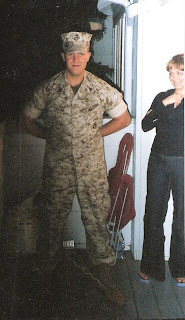