I’ve never told a soul, but I should have.

This is a post that has been really hard for me to write. For a few different reasons.
– My family knows about and reads this blog. As do many of my friends. But no one knows about what I’m going to share today.
– It’s very personal and still a little embarrassing to admit or talk about.
– I was reading through my favorite bloggers yesterday, and one of them, Blair, wrote about her experience with this. Only hers was a different form. So I hesitated publishing mine on here, because I didn’t want you all to think I’d jumped on the bandwagon to glean a little bit of her popularity or to put my heart out there only because she did hers. I wrote this almost a week ago and have been working on it ever since. Blair had a completely different experience, and what I’m going to tell you about, I never heard anyone mention before having a baby.
I wish I had though. That’s why I decided to go ahead and share it with you. If I didn’t talk about things because another mom blogger did, I might as well hit delete on the blog now. We are moms, we’re bound to have some of the same experiences and write about similar things.
In the last few weeks of my pregnancy before Bella was born, I began to almost get panicky about sharing Sam with someone. We had been married almost 7 years at the time, and I was used to our life just being us two. We would cuddle on the couch at night, uninterrupted. We would go out to dinner whenever we felt like it. We took trips and went fishing and drove back and forth across the country to see our family. I was his one and only, we spent almost every minute we weren’t working together. He’s been my best friend since I was 14. I knew our life was about to change in a way I couldn’t even fathom and it was thrilling, yet terrifying. Not that I wasn’t looking forward to being a mom, I just knew our life as “Sam and Diana” was over.
When Bella got here, Sam instantly fell in love. I could see it in his eyes, he was smitten with this little red, screaming, barfing bundle of, well, of sleep and poop. He carried her all over, fought to hold her, took pride in her diaper changes, talked about her for hours – really everything a new dad does.
And I was horribly jealous. I still feel bad just thinking about it, but I was. Isn’t that awful? I was jealous of my own child. I felt like one of those moms who’s daughter turns out really beautiful and she becomes a horrible mother because of it. Like the stage mom that you know just is eaten up with envy by her talented daughter, and therefore makes her life miserable. I knew it was bizarre thinking – I mean I could rationally tell myself, “This doesn’t mean Sam no longer loves you.” But inside I kept thinking, “Well, he’s never been that emotional over me, he doesn’t look at me like that, he wouldn’t stop doing that for me” and on and on. I hated feeling that way. I would bawl at night wondering what on earth was wrong with me. I had to be the worlds worst mother to feel this way.
I loved Bella so much, it didn’t change that, but I was awful to Sam in those first few weeks because I was so afraid he had forgotten all about me. He tried so hard to pay attention to me, to help me out, to do anything I wanted and needed, but for some reason the feeling of insecurity just kept popping up and I would act bitter and angry. I snapped at him about everything, refused to listen to him when he talked about Bella, and was in general, a really horrible person. I even thought about stopping breastfeeding her because he wanted me to so much for her benefit. See that picture? When I took it on my cell, I was so tired I couldn’t even function. She was about 1 week old. I see at that now and think, “Wow, I should have gotten more rest.” 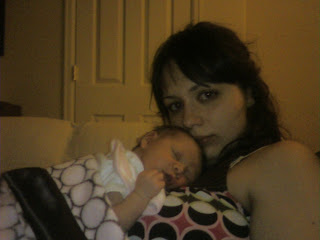 Looking back, there was definitely some PPD going on. Because now I can’t believe I felt that way, and had those thoughts. It was not normal. I was so ashamed of thinking like that, I didn’t tell anyone. I spent every day racking my brains for what was wrong. I tried to push it aside, tell myself that I was just a nasty person, and that was the reason why. I was obviously a terrible mother, or I wouldn’t feel this way, and if I could just get over myself, and stop being so self centered, these feelings would go away. They didn’t. Not for a while. It didn’t help that I was incredibly sleep deprived, dealing with a screaming infant who had reflux after every time I nursed her, and continually threw up on everything. I was at my wits end to know what to do. I felt like at any moment I would snap and run away, start life over in a town where no one would ever know what a horrid person I was.
After about 3 long weeks, I finally began to feel like I was able to handle my days a little more. I started sleeping during the day, slowed down on the insane cleaning sprees I had gone on during her naps, and gave myself permission to feel unhappy, but to look at the bigger picture – this couldn’t last forever. The fog began to clear. I found myself  beginning to enjoy the time Sam spent with Bella, the fact that we were both able to start to coo over her little accomplishments. I realized that he still loved me every bit as much, if not more than before we had her, and he adored her as well. He loved us both in a different way, and I knew that. I had always known that. I kept what had happened to myself, but the fact I had ever felt like that still weighed heavily on me. Guilt would consume me at times and I’d look at my daughter and think, “How could I have had those thoughts?”
Then one day, I happened to flip through one of my pregnancy books for some breastfeeding advice, and came across a small article that addressed jealousy after giving birth. It was a letter from a new mom who was jealous of her husbands’ attention to their daughter and asking why she felt this way. Reading the reassuring response given that it was normal for some women, it was a part of PPD, and if it continued to get help – made me feel sane. I wasn’t the only one who felt like that. I wasn’t a terrible person. It went on to explain that many women felt this way after giving birth.
I finally got up nerve and talked to Sam about it, apologized for acting that way and explained that while I wasn’t making excuses, the article had really showed me that sometimes you don’t have control over your hormones, and you can act crazy and have insane thoughts. I should have talked to someone about it. I was just really embarrassed at the time. And horrified with myself. Of course he was completely understanding, although he had wondered why I had been so upset all the time with him.
I want to share this in case anyone reading might feel, is feeling, or has felt this way. Had I not found that article, I might have never known that those feelings had to do with PPD. I thought it was being sad, or unhappy, or overwhelmed. And it is. But any of those feelings I had were overshadowed by the jealousness. PPD comes in different forms, and lasts different lengths of time. Sometimes it goes away on its own, like in my case, and sometimes it doesn’t. Either way, next time I’m talking to someone if I feel in any way “off” after having a baby. It’s not something you can control, and its not your fault. These feelings are a combination of hormones, lack of sleep, a huge life change, and the out of control experience of having to suddenly be responsible for another human you don’t know anything about.
If I could do anything different, looking back at those first few weeks, I would have talked to my Dr. right away, and read more on what to expect emotion-wise after having a baby. It would have helped to be reassured that other moms go through this. It’s still hard to share this, even now I’m wavering on not hitting the “Publish Post” button, because it’s not easy to know how many people who know me will read this. But I have confidence in who they are that they will understand. I’m doing this for maybe that one person that might read this, now or later on down the road stumble on this, and think, “That’s how I feel.” If this makes one woman feel a little bit better, and encourages her to talk to someone, then writing this was completely worth it.