I’m not a brave person – in meeting new people. I don’t really enjoy it, although once I get to know someone I’m fine. It’s the initial, “I want you to meet so and so” that scares me. My sister has a million friends, and I was very cautious about getting close to anyone – ever. I usually only had one good/best friend at a time, and we’d hang out with each other until both of us were so sick of the other there had to be a break. I’ve spent a lot of time lately thinking about living here with no girlfriends, and wanted to write about it. Maybe it will help me get past this fear.

I think it stems from when I was 8. Up to that point, I had lived a pretty ideal little life. We had moved once that I could remember, and being only 5 it didn’t really matter. I started first grade in a small town in New Jersey, where I had also been born. I wouldn’t say I was popular (because really, at age 6 who is?) but I had a lot of friends and loved my school.

I was a straight A student, loved to write and draw, I lived next door to one of my best friends, J, a boy with an imagination that rivaled my crazy one, and down the street from my other best friend, E, who was smart, funny and the one who always made us stop and think about things. We loved the Little Mermaid and making up our own clubs. I had a little brother and sister that I directed in plays we wrote. We had a tire swing, a huge field behind our house, a neighborhood pool, honeysuckle bushes, and fireflies. 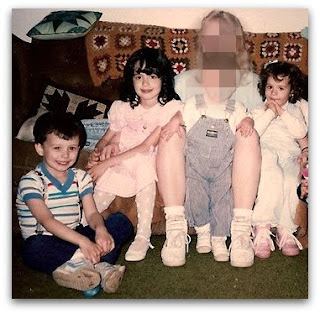 I vividly remember my school, my 3rd grade teacher that I thought was simply the most wonderful teacher ever. I still can recall songs we learned from Mrs. Apple – our music teacher with the rolling piano. She went from room to room with that thing. I rode the bus with all my friends, we passed notes and made up stories, sold lemonade on weekends and shucked Indian corn into a jar and made people guess how many kernels there were. We didn’t know the number, so whoever was closest to our guess won.

I was in an environmental club and Girl Scouts with kids from school. E was in most of my classes, and we were inseparable after school and on weekends. I loved her mom, her sister, her dad, her house – she was like the twin sister I’d always wanted. (Everyone wants a twin at some point right?)

My dad was always really sick there. He spent all summer in his room with a humidifier and tissues stuffed up his nose from allergies. New Jersey was like being in hell and he couldn’t escape. I used to come home from school, sit on his bed and chat about my day with him. He was so miserable, and I was too young to really understand New Jersery couldn’t be a long term living situation.

One morning my brother, sister and I were watching cartoons and my mom and dad came in. They turned the TV off and explained that we were moving. I remember they were sad and answered all of our questions as best they could. My dad had found a new job in Colorado and we needed to leave, because summer was coming. I wasn’t going to be able to finish my 3rd grade year there, but almost. A girl in my class threw a surprise going away party for me and everyone in my Girl Scout troop gave me a gift and card.

I don’t remember much after that. I do recall him going first – driving out and taking my two parakeets with him. I also remember my last day. I spent it at E’s house playing. I knew she was sad and I was too, but I really didn’t know how to tell her that. I just wanted the day to be over so I could stop feeling so upset. My mom called for us to say goodbye because we were leaving, so I hopped off her tire swing, shouted, “Bye!” as she walked towards me, and got in the car. Mom turned around with this look on her face of, “That’s it?” and said gently, “Don’t you want to go talk to her?” I shook my head and didn’t go back. Later on down the road I cried and cried about never being able to see her again. I have always felt bad about leaving like that.

The memory of that is still so painful I can’t even write this without crying – 18 years later.

After we moved, I was enrolled in a Christian school where my mom was also teaching. In 4th grade now, I had a hard time adjusting. I got D’s for the first time ever, and my parents were shocked. I lied to the kids in my class about being allergic to the cotton that was swept from the trees into the air so that they would cover my eyes and walk me around like another girl in the class. Only the next day I ran out to play and everyone wondered where my allergies had gone. Pretend FAIL. I had one friend that I played with – I don’t even remember her name. I missed E and J more than anything, and kept their letters to me in a box I had, along with all my valentines, Christmas cards, notes, and pictures from New Jersey. This one is from E. I had a hard time writing anyone back knowing I wasn’t ever going to see them again. 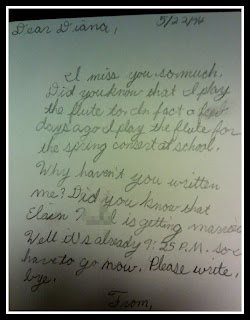 My mom was pregnant that year and I got another little brother. We moved into a bigger house in the same area, but I switched schools. For 5th grade I went to a public school. I liked my teacher, and wanted so much to be friends with her daughter Christy who was the same age as me. She lived right up the street. I was at her house one day and her mom asked me if I was staying the night with the rest of the girls. Since I was the only one there, I wasn’t sure what she was talking about. I saw Christy shoot her mom a dirty look, sigh and say, “I’m having a slumber party for my birthday tonight. Wanna come?”

When someone says it in the most sullen, uninviting tone ever, your response should be, “No thanks.” But I was so desperate for a friend I agreed and ran home to get my things. I spent most of the night being ignored by girls I didn’t know. I was so shy I couldn’t talk to any of them, and Christy pretended she barely knew me.

That same year I was placed in Gifted and Talented, which meant for part of my day I would leave my class and go to a different one to learn other things. I didn’t like that. It made me stand out and I had to readjust to another class with new kids. Somehow my parents found out I was eligible to test to enter a private school for gifted kids. I know they were excited, and looking back I should have been too, but all I could think of was if I passed the test, I’d have to be in a new school again. So I purposefully flunked it.
~~~~~~~~~~~~~~~~~~~~