I love epi’s, first time hiccups, and how you can save a life

Bella had a rather, well, long birth. Her story on getting here was full of ups and downs. Today I’m sharing it with you in hopes of raising awareness for Embrace.

(Full disclosure so you won’t worry if I’m trying to sell you something: I’m not being paid or receiving any type of compensation for this. Awareness for this important cause only.)

I went into pre-term labor at 31 weeks. I was placed on modified bed rest – which basically meant I couldn’t do housework, heavy lifting, or any exercise. I was thrilled for several reasons; I had permission not to do anything all day, and Bella didn’t appear that early.

At 34 weeks I started contracting again and was placed on strict bed rest. Which meant:

I was 90% effaced and 1cm dilated at that point, which had everyone terrified. I was already tired of sitting around all day – so having to lay on the hideabed pulled out from our couch was torture. Sam packed me a cooler each morning before work and rented me tons of movies and library books.

I thought I was going to go insane – but I had The Bump and my ladies on there. ::fist pump::

At exactly 37 weeks, a Friday, I woke up to contractions again. Once more, I went to the Dr., who confirmed I was now 100% effaced and 2cm dilated, and told me to pack my bags. I did – and since I was no longer at bed rest because I was considered full term, I also cleaned my entire house and scrubbed the kitchen floor on my hands and knees.

That night I had painful contractions, and by the next morning I was laying on my big yoga ball praying for sweet relief. I went until 4:00pm like that, then called the Dr. at 5 minutes apart, and Sam to come home from work.
On the way there, I remember thinking, “This is painful but I can handle it. I’m going to go natural” – which had been my plan all along.

::dies laughing at my naivety::

3 hours in and I was begging someone for an epidural. The fact that I was STILL at 2cm wasn’t encouraging. I thought I was going to die. Or rip in half. Either sounded better than another contraction. I was screaming at anyone who came in and poor Sam was at his wits end. Also – I wasn’t breathing right and my blood pressure and heart rate were climbing way too fast.

I finally got one and considered taking a second husband in the form of that man who did it – but sufficed with a thank you.

I was checked right after the epi and found that I went from a 2 to a 7 in an hour. Oh yes my friends. If you’ve had a baby, you know that equals some major pain.

At 9pm, four hours after being admitted, I started to push. And push. And push. Some poor nurse stuck on duty that night had the really wonderful job of, ahem, stretching me. Down there. :/ Yeah. I bumped into her in the post office a few weeks later and it was slightly awkward. But she was a real champ.

At 12am I was still pushing, exhausted and her head was stuck. My contractions had slown, so they asked about Pictocin. I would have accepted 409 being pumped into me at that point to get it over with.

So much for “The Business of Being Born

At 12:30 my Dr. looked me square in the eye and said, “I know we talked about no episiotomy, but you can either push for at least another hour or I can cut and we’ll have her out in 5 minutes.”

A few minutes later, I felt the most enormous sense of relief and a feeling of complete bliss. I asked crying, “Is she really a girl?” because at that point we had so much pink and her name on everything, it would have been a shock for a little boy to come out.

My Dr. nodded and handed Bella to me, who was purple. I remember saying, “Oh, hi love!” and bursting into tears and then sobbing, “She’s all purple!”

They assured me it was normal, but after oxygen didn’t work they whisked her away for a few minutes to warm her and get her breathing normal.

The other day I stumbled upon this on my camera – she was about 2 or 3 hours old at the time.

This is so dear to me because she hiccuped all the time inside of me, against my hip bone, and I would press up against Sam at night so he could feel it. These are her very first outside hiccups. 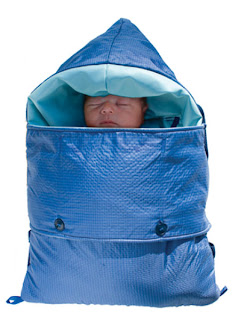 This brings me to the reason for this post today. Over 20 million babies are born with a low birth weight or premature each year. Embrace is a company that produces infant warmers for developing countries called the Embrace Infant Warmer.

Acting like a sleeping bag, this low cost device is made to save thousands of lives from babies that develop hypothermia because they are unable to regulate their body heat. Even room temperature can be freezing to these little ones, and incubators are often too expensive for rural hospitals to afford. Embrace is non profit organization and needs to raise 1.5 million to help these babies.

To learn more, donate money, or to purchase a $25 tribute card in someone’s name (pic on left), please visit Embrace’s website.
Read the birth stories from the other women blogging on this today:
http://www.lebedafamily.blogspot.com/
http://www.callmelaurajane.com/

Please consider retweeting this to spread the word about Embrace:

Thank you to Sarah from Sprout Reviews for putting this together!

Look what I foundThings that make me smileVlogsWorth every penny