First part of this (didn’t know it was going to be this long) story.

6th grade came and we all headed to middle school, which meant a new school again. This time I went with most of my friends, and although I had no best friend, I got along with almost everyone and enjoyed my classes. But I felt completely out of place outside of my classroom – there were 6th graders making out in the hallways, gangs, punks that would run by and shove you into a locker, and someone called 911 on a daily basis for a while. We had a suicide that year and it was broadcast over the school intercom and everyone freaked out crying. I was in way over my head.

After 6th, we moved. To a completely new town, in fact, the one I am currently living in. Again, I was enrolled in a Christian school and my mom taught while my dad worked 2 jobs. That, hands down, was the worst year of my life. I was new and most of my classmates had been with each other for years. I was odd, wore huge glasses, had buck teeth, high water pants, liked to draw and write stories, and wasn’t interested in boys. I was immediately shunned.

One girl and I became instant friends that year, A was really the only thing that kept me from going insane. She and I had the same insecurities, and the same thoughts about our teacher (who was the devil), and the same taste in music and movies. I spent hours at her house talking with her. We did everything together. However, neither of us was secure enough to stick up for each other when something happened. I was friends with a boy who had recently moved from England, and he was “going out” with another girl in my class. One time at a dance we were talking, and he left to go back inside. His girlfriend and her best friend walked up, snapped me on my bare legs with a rubber band and said, “You better stay away from him.”

In between all of this, I had my brother and sister to play with and talk to. We had a creek behind out house we loved to play in, pigeons to care for, dogs, my parakeets from New Jersey, and books. Oh, my books. I found Laura Ingalls Wilder and Anne of Green Gables and fell into a imaginary world where I was a spunky tomboy that was able to tell people off I that were horrid to me. Only I couldn’t in real life. The scene where Laura’s sister Carrie is punished by the teacher for rocking in her seat – so Laura rocks it for her – is one of my favorite book moments ever.

In 8th grade my mom was able to stay home, so we moved to the public school. Where, once again, I was completely different and left to myself. I simply didn’t have any good friends that year, A was still at the Christian school and we didn’t see each other a whole lot. The only part that really stands out about that year was this: There was a girl named Robbie that was new, and she was really pretty. All the boys were in love with her, and most of us girls were super jealous. I was at my locker one afternoon when I heard a guy say, “Hey!” in a really friendly tone. I turned and smiled at one of the most popular boys in school, who took one look at me, smacked his buddy on the arm and said, “OMG, look, I thought that was Robbie!” They both walked off laughing.

Really, it does sound awful. This was just my friendship side of life though. My parents were wonderful and supportive. I had friends at church and my siblings. I shared a room with my sister and we stayed up till all hours giggling at stories I told her. Family time was something that was a huge part of my life then, and now.

9th grade was high school. Since all the same kids went, I didn’t feel so out of place. I became friends with Jennifer (not my guest blogger), who was sweet. I thought she was about the best thing since sliced bread, until I found out that she had made out with my very first boyfriend and he broke up with me to go out with her.

Being betrayed, ignored, and constantly moving from my friends left me with a wall that almost no one could climb to be good friends with me. Until Brandi and Jen. Brandi was my best friend sophomore and junior year of high school. We were obsessed with ‘N SYNC – I remember we actually had a fight over me signing a letter “Justin’s girl” one time. We made up dance moves to their songs, talked about everything, and spent tons of time at each others homes. One of my best memories with her is waking up early to leave with her family on a day trip – and setting her CD player to, um, 72? on the volume so that it woke us up to, “It’s Tearin’ up my Heart” and her little sisters completely freaked out and started crying from surprise. We got in trouble for that too.:)

Jen (my guest blogger) was like my other half. She was this crazy, funny girl that would do anything for a laugh. We had so much fun together that at times I thought I would die from laughing so hard when I was with her. The same sense of humor, we found the stupidest things funny. One road trip to a basketball game (we were cheerleaders) we did everyone’s name flipped – so Mary Sims became Sary Mims. Only then we did our Booster Club moms’ name. Shelly Whitler. Yep. Welly Shitler. We told everyone we knew about it – and when it got back to Shelly she was very unhappy. 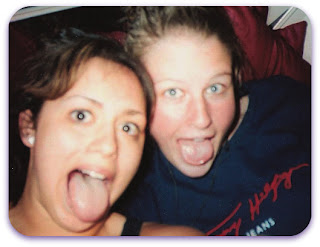 For my 16th birthday we went camping in the woods, and my dad took us to a lake on our boat. Cheerleading, choir, sleepovers, car rides, long talks – she dealt with her problems by making herself the opposite of what she hated. I loved Jen, she was truly one of the best friends I have ever had. We had our differences, at times I felt ignored when she found a friend that she hit it off with, and she told me how left out she was when I started dating Sam. But we had spent so much time together, and shared so much, that it seemed like no time had gone by when we got back together again.

I was a cheerleader (I’m on the left, Jen right), dated guys I wasn’t supposed to, and tried my best to fit in. I was determined not to be classified as a “dork” anymore, and one of my ways to do that was get plastered at a guys house at age 16, and then lie about it when my mom came to get me. 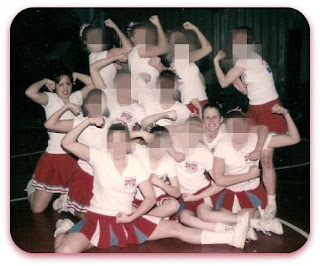 And then Jen, and Sam, left for the military, and I was alone in my small town, graduated from high school, unsure of what to do with my life. I missed having a friend that would do just about anything with me – whose idea of a good time was to rewind the asparagus in the mouth part of Ace Ventura over and over until we couldn’t breathe from laughing. I was beyond lonely and missed my friends.
~~~~~~~~~~~~~~~~~~~~~~~~~~~~~~

Click here to read the last part of this. It’s much happier. I promise. And you get to meet “E”. 🙂