Paci – how do I loathe thee? Let me count the ways. Sleep Training Night 2

Sleep Training night two. Same routine, down at 8:30. We read Muddy Paws this time. I’m so psyched that I get to read to Bella and she loves to look at the pictures. Reading was one of my favorite parts of being a teacher.

She falls asleep and we watch Survivor since we missed it Thursday. (I have watched every.single.season of this show. I have panic attacks at the end of each one thinking Jeff might announce they are ending.) Around 10:30, she wakes up. Paci in, tummy rub, she falls asleep, I head back to bed.

Now bear with me here – it gets a little muddled because everything past midnight started to run together. It’s really funny how when I’m in the middle of it, I think, “Oh, I’ll totally remember this in the morning.” Nope. I don’t. 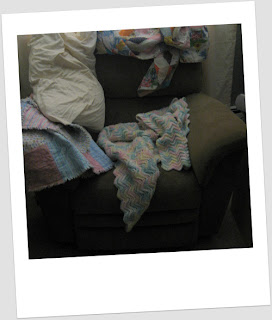 Around 11:30/12 she starts to cry again. Same thing, only 10 minutes later she’s crying again. To me, there is honestly little worse then being woken up repeatedly after just falling asleep. It makes me crazy. I’d rather stay up all night. I finally decide to grab a pillow and haul myself into her room to the chair, where I make myself a nest of sorts out of 3 quilts, none of which cover my entire body, and wait. This seems to work because at 12 I nurse her one last time, put her down and we both fall asleep till 3:30.

At that point she wakes up and is very angry. Remember how I mentioned the kids that figure out the second time something is permanent and freak out? Yep. So she starts to wail, scream, her little swaddled legs are kicking and moving. I pat, rub, soothe, sh sh, put the paci in a bazillion times. She in turn does head smash (which I hate) against the rolled up towel in her bed (seriously, that towel is like another whole post). Every time she head smashes the paci falls out, prompting her to scream even louder. I finally give up, let her cry for a while as I sit on the chair with my head reverberating from the noise, and about 10 minutes later try the paci again. She dry sobs and takes it – and falls asleep. 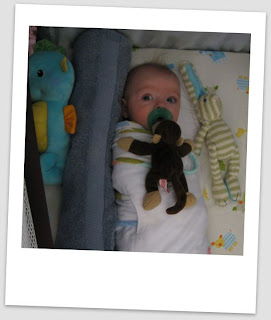 I don’t trust her sleeping long so I get on facebook on my phone and play around for a while. Then around 4 I’m out. At 5 she wakes up again, having managed to get herself completely out of the miracle swaddle and is upset about it. Reswaddle, paci, patting, sleep.

I believe she woke up a few more times after that, but not for long because I simply can’t remember. The next thing I know it’s 8am, the sun is peeping through the shades, and I hear a very happy baby in her crib. I peek over the rail and she’s got herself rolled to one side and is talking to the monkey bat hybrid. She sees me and lets out a giant grin, I throw up the shades and nurse her. I actually feel a lot more rested than yesterday, only my neck is killing me.

Usually she’s good until about 10, but the past few days we’ve been doing this she wants to nap at 9. Which is fine, she takes good naps. So right now she’s in her nap.

A few things to mention for those of you thinking about doing sleep training. I got these ideas from books and other people so I can’t take credit but I can assure you they work. Naps are key. If your kid is taking really crappy naps, you’ll have a hard time doing this with them. Bella used to nap 45 minutes after every feeding. She was not getting enough sleep. So now we do 2-3 one to two hour naps a day. Much better.

Sam is helping with the bedtime routine, however right now he works a early morning shift at work. I could have waited to do this and he would have helped, but I’m really not patient and wanted to start it now. So I accepted I would be pulling the night shift. It’s fine with me, not like I’m going to get any sleep with her yelling in the other room anyway.

I understand parts of this might sound insane to some of you. 🙂 Rest assured, it sounds crazy to me as well. But I have to do what works best for me in this too – and if that means sleeping on the chair then so be it. I can handle it, because I’m following the book and know there’s an end; I can see it, I already feel confident in what we have accomplished so far.

I’m tired but feel a lot more rested. Bella is beginning to sleep for longer periods of time at night, and we just went a solid 7 1/2 hours without nursing!! That alone is huge, as were my boobs this morning. 😉 She is happier during the day, goes to bed without a fuss, and I see a pattern beginning to form in her sleeping. Two days people! The Good Night Sleep Tight book promises all night sleeping in 2 weeks, so we’re getting there.

Also, totally off the subject, you might notice my blog roll is gone. I heart all my blogs I stalk, but for some reason having those on the side made my blog go nuts. There wasn’t any way to fix it, several people looked and told me there wasn’t anything wrong that they could see in the Layout or HTML code, so the only way to get my blog back to normal was to take those off. It worked, and I’m still considering other ways of putting them back on. But that’s why they’re gone.

Any suggestions for breaking the pacifier addiction? I want to take a hacksaw to that thing – as cute as it is. How do I get her to fall asleep and re-fall asleep with out it? Or to calm herself down without it? Once she goes to sleep it falls out of her mouth, but if she wakes up she screams until it’s back in. So annoying. If we could figure out a way for her to not have to do that, I think she’d sleep a lot longer.