Side note: After the Anonymous comment about sleep training yesterday, I wanted to say that my Dr. approved Bella being sleep trained and the Good Night Sleep Tight

book we are using. I don’t think I mentioned that before, but if you are trying to sleep train, I, as well as the book, highly recommend talking with your Dr. first. I’ll post more on that in my Night 4 update later – right now it’s 10:45pm and someone has been asleep 2 1/2 hours SOLID.

Yesterday we took Bella to the Dr. for a follow up appointment for the blood in her vomit 2 weeks ago. Luckily there isn’t anything wrong, her stomach lining was just irritated from reflux. While we’re there, I mention to the Dr. that Bella’s head is a little flat in the back, a little off tilt on one side, and ask if it’s normal. 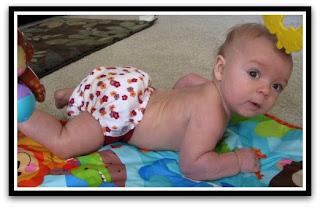 Sam’s been saying she has an odd shaped head for a few weeks, and I brushed it off as something most babies go through. I figured it would work itself out. Bella is hardly ever on her back except at naps and night, most of the time she’s in the Bjorn/Moby or in her Jumperoo. Babies just have soft heads. Our realtor the other day even said to her, “What a nice, round head you have!” Sam laughed so hard later on about that, I thought it was a rather odd comment.

So I fully expected the Dr. to tell me that it’s no big deal, she’ll outgrow it in a couple months.

Instead, I hear, “It’s not normal at all, common, but not normal.” As I look at her in slight shock and confusion, she adds helpfully, “Perhaps less time on her back, more time on her tummy or upright might help.”

I felt like crawling into the floor. I was so embarrassed. I wanted to defend myself, but I didn’t know where to start. I don’t leave my child on the floor all day. Seriously, this kid spends 80% of her awake time strapped to me, in my arms, or in her jumper. To put the cherry on the (slightly lopsided) cake, she starts talking about HELMETS and how they don’t really help that much so they don’t recommend them often. Helmets?! Well, while we’re at it, let’s also talk about the short bus for school, corrective glasses, and a back brace. I wanted to scream, “She’s perfect, don’t look at her!” and cover up her head.

She adds that she can tell Bella favors her left side because the flatness is apparent there, and suggests we put things to make her turn to the right more. I think of all the times I placed every single thing to her left since my baby book said babies prefer things to the left to look at. Her crib positioning, her changing table, her car seat, where I put her on the floor for tummy time – all to the left of whatever it was she could look at. Then the Dr. says that I shouldn’t be putting her on her back to work on rolling over. She should be on her tummy for that, and she’ll do it faster. Fail #2. I have unknowingly cause her to be misshapen and stunted in baby skills due to my stupidity. 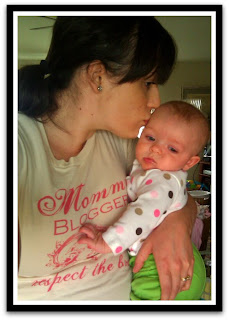 Really, the worst part as the Dr.’s talking about getting her off the ground more and working on rolling over, was the fact I was wearing my new shirt from Cafe Press that said, “Mommy Blogger – respect the brand” on it. So basically it screamed, “This is what I do all day as my child lays her flat, balding head on the floor in total neglect! Blogging comes first!”
I feel so guilty, and like such a terrible mother that I didn’t notice Bella’s head. I know it’s not the end of the world, I tend to over dramatize what people say (I know, shocking, right?) and she doesn’t need a helmet. It will even out.
But I experienced my first major, public mom fail. A fail that everyone notices. A fail that my poor baby is the recipient of. A flat head. 🙁
FAILMotherhoodReasons to save for for therapy
Prev Post Next Post