Indian food with a side of flashback 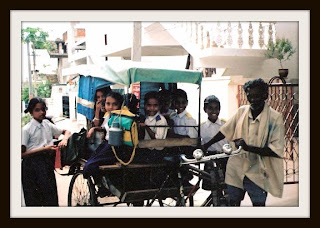 I lived in India for a month 7 years ago this summer. It was an amazing experience. I worked at an orphanage, lived with an Indian family, and am now completely and utterly addicted to Indian food for the rest of my life. India is such a powerful place – from their religion that permeates every part of their lives, to their vibrant clothing, to the food that you can’t stop eating, to the smells that you never forget. 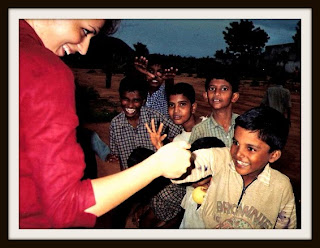 When I walk into an Indian restaurant, it’s like someone smacked me in the face with every single memory I have of India and it floods over me. For a second it’s all I can do to keep walking.

Sam isn’t a big Indian food fan. Possibly because his stomach isn’t the strongest for that, and he spends quite a chunk of time in the restroom after.

However, the other day when we looking around one of the cities we are considering moving to, he suggested we stop for lunch at an Indian restaurant. Much to my delight. I was so ready to stuff my face. Bella was getting cranky in the back (she has a very short fuse) and I thought offhandedly, “I have to pee.”

We parked in the worlds’ smallest parking space and tried to figure out how to get Bella’s carseat through the door without carving a giant gash into the car next to us. Then I got out the purse, diaper bag, blanket, toys, burps cloths, and paci, and we headed in.

By this time she was mad because the sun had been in her eyes for less than a nano second and it was unacceptable. So she began to scream. The host looked annoyed, and a few men in the place turned to look at us with an, “Well, there goes lunch!” expression. We found our table, and I headed straight to the bathroom to change her.

I opened the door to find a filthy, cramped bathroom complete with toilet, sink, and MASSIVE wardrobe. So large I could barely open the door. I squeezed us through while wondering what on earth it was doing in this tiny room? It was so high that it almost touched the ceiling and had fake flowers all over on top. I looked around and suddenly realized – there was no changing table. Or even something that resembled one. For a split second with Bella shrieking in her seat I thought about the wardrobe and if I was tall enough… Baby cries make me lose my mind quite often.

Having no other choice, I put down a mat I had bought on the disgusting floor and laid her on it. Que intense anger. She began to wail and throw herself all around, as I tried to pin her down so no part of her would be contaminated. I took off her little clothes while cursing myself for not picking an easier outfit, and unloaded my bag trying to figure out how to:

I managed to get it all done, except for #6, and put everything away while holding her with my free hand, and stood up only to realize I had to pee very badly, and she had to nurse. Very badly. I planned on nursing her once I got back to my table, since sitting on the wardrobe wasn’t an option. I thought briefly of taking her and leaving her with Sam for just a second so I could pee, but the thought of her screaming hysterically out there was more than I could bear. But I had no where to put her without unloading the diaper bag again and placing her on the floor. And because I couldn’t pin her down while peeing, she would roll. Onto the floor. And I would go into a coma over her touching it. Actually, it was quite like the bathroom in India in the house we had stayed. 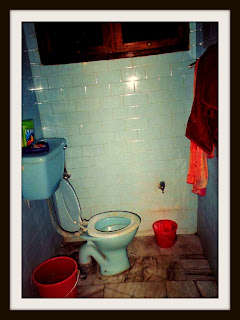 Yes. I took a picture of the bathroom there. I couldn’t imagine seeing anything like that again (surprise – I was wrong!). The buckets? They don’t use toilet paper over there. OH, we certainly did. I wasn’t about to use my, ahem, hand. :/ No please.
Anyway, left with no options, I held my pissed off child on my hip while unbuttoning and tugging and jumping to get my jeans off. I was cursing myself for not choosing something easier to get off – like sweats. Or a dress.
Finally I did it, held Bella while whispering, “I promise never to tell you this story when you are 16 because I don’t even want to think about it” and felt very proud that I had done it with one hand. Until realizing that I had to PULL THEM BACK UP. Jeans. One handed. Back up. With a zipper and a button. OMG.
10 minutes later and close to Bella going hoarse, I managed to heave them back on. I gave up on the button and pulled my shirt down as far as I could, picked up everything and headed to the table.
Sam looked worried and said, “Are you ok? You’ve been gone so long.” I didn’t answer because all I could think of was, “Must feed Bella now.” He understood, went to get me food from their buffet, and I plopped her on the boob and sat thinking, “I took for granted walking into a restaurant and sitting down to eat. Going to the bathroom and buttoning my pants. Never again.”
I forgot to ask anyone what the point of the wardrobe was in there. Other than to taunt harried moms about how a changing table could easily fit there. And I got a little more India flashback than I had ever wanted to have.
A funnyFAILFrustrationReal lifeReasons to save for for therapy
Prev Post Next Post