My 1st McFatty Monday – Put the Harpoons Down

I stole that little ditty from 3 pugs and a baby off Twitter, who was talking to me about potentially being harpooned while swimming with her LO.

Yes, I have joined McFatty Monday. I figure, Blair needs more press and I’m going to be gracious enough to bestow it upon her. Yeah. Right. 🙂 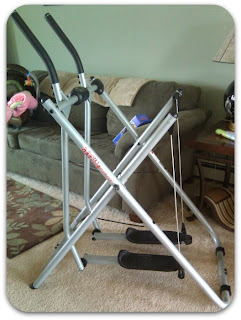 I have struggled with my weight my entire life. I’m not (contrary to my title) a whale, but I’m not in the running for being a supermodel either. However, I am no longer ok with not fitting into my pre-pregnancy clothes. Some I can, but shirts and most of my jeans no longer fit right. I don’t like that.

I decided last week to start exercising. I use this:

Thank you Tony Gazelle for inventing a product that allows me to watch TV while working out. Also, it fascinates Bella to no end. She stares at me from her jumperoo with wide eyes while I’m on it, nomming on one finger and drooling. 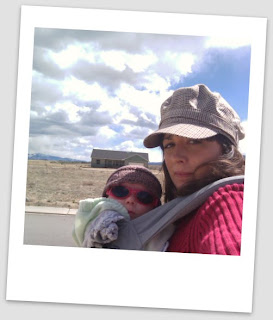 I also started walking with Bella. We both enjoy that, when the wind isn’t whipping us around and it’s actually a sunny day. Yesterday it snowed. In May. Special. Doesn’t she look cute? No, that isn’t a small, oddly shaped arm sticking out. It’s the hood of the Ergo rolled up.

Then I thought to myself, “Oh hey, I’ve been paying for Weight Watchers Online for 4 months now. Maybe I should use it?” Much to my husbands delight – who was rather miffed about me just letting my membership go but not canceling it.

I’ve done Weight Watchers once before, November ’08 I started and was promptly told I was insane by my co-workers because the holidays were right around the corner. 3 months later I’d lost 15lbs. Then I got knocked up. There ends the diet story.

After Bella was born, I was told by my Dr. to keep 10-15 extra pounds on for breastfeeding. DONE. No one needed to tell me twice. It was like hearing I’d won the food lottery. Indeed, I have done justice to her words.

Now Bella is starting solids and I’m not losing any more weight. In fact, I’ve gained 2lbs in the past month. I don’t know how that is possible with breastfeeding but apparently I am taking hunger to a new level.

Weight while pregnant: 183. (Is it sad that I was proud of this at the time? Like secretly hoped I’d hit 200? Hormones much?) 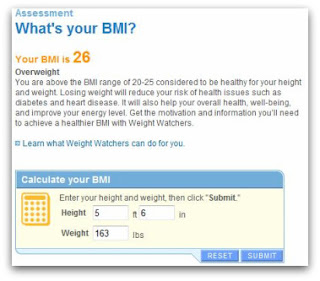 So…overweight. By one point or whatever it’s measured by. But still. 🙁 Not a great number.
I redid my profile to get my points (they give you the option of breastfeeding exclusively and breastfeeding with solids) and came up with this: 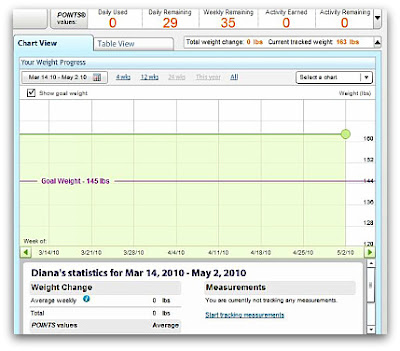 As you can see (kinda) my goal weight is 145, which for me means a size 6 and knowing my thighs aren’t going to light my jeans on fire from the friction while I walk. My daily point allowance is 29. Which is 7 more than last time I did this because I’m still breastfeeding. Awesome. 7 points is like an entire meal on Weight Watchers.
Also, exercising gives me more points. And those 35 weekly ones? Those are for last night when I had 2 glasses of wine and a bowl of popcorn (sans butter) while watching Talladega Nights. “One of you turds is ’bout to get smacked in the mouth!” ::dies::
Weight Watchers teaches me that I’m eating the wrong things, and using up my points by doing so. It also teaches me portion size and self control. I never realized just how many times I unconsciously just open the fridge during the day and grab something. Yesterday was a wake up call when suddenly I had to track it all, and I didn’t want to use my points on 4 cups of pasta. (Tempting, but no.) Even eating organically doesn’t matter when you’re eating 2x as much as you’re supposed to.
18 lbs. It seems like a LONG ways to go. It’s so worth it. I’m going to do this. I am going to fit into my clothes again. I am going to zip my flippin’ pants when I put them on without them being damp and stretchy. I will wear tops that do not have a Bella Band underneath to suck it in. I will not cringe when I look at my stomach and think of Kate Gosselin after she had 6 kids. (It’s not that bad but you know.)
So Weight Watchers, 30 minutes of working out every day, and making better food choices. It will happen.
Something NewWeight woesWorth every penny
Prev Post Next Post